A reflexion on 2018 in the wildlife garden

Posted on December 27, 2018 by mybiodiversitygarden

The new year is on our door step so it is good to look back at 2018. It sure was a very unusual year: we experienced a very dry period, just when trees, shrubs and flowers needed the rain. In May we had 23 mm of rain (May 1st) followed by 2mm in June and no rain in July. Several plants were lost and some were eaten by slugs which seemed to appear from nowhere after I had watered the garden. Most Campanula were lost which was bad news for the solitary bees that needed Campanula pollen to raise their young such as Chelostoma rapunculi. 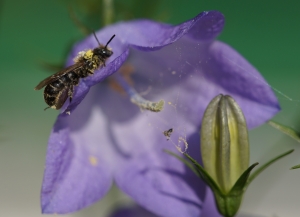 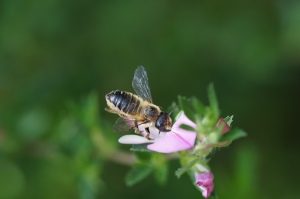 Spring butterflies such as the Brimstone did show up and were doing ok, albeit less abundant than in 2017. Hardly any summer butterflies were present which is not unusual since I only get a handful of butterflies each year. It seems some butterfly species are struggling in urban areas whereas some bee species seem to be able to adjust (some, not all!).

So which species did well? For some strange reason, red mason bees were not common in 2018 but its close relative, Osmia cornuta, had a terrific year with over 75 nests counted. Bee hotel management is key. It is important to clean the nests in autumn so that you do not end up with loads of parasites as bee hotels offer a great habitat for the natural predators of mason bees such as Cacoxenus Indagator.

A look inside the nest. You can see that the mother bee has made several nest chambers which are separated by a thin wall made of mud.

Other solitary bees that were doing well were the wool carder bees (Anthidium manicatum) and the fork-tailed flower bees (Anthophora furcata). Their presence proves that by providing the right plants, one can attract several bees to the garden. 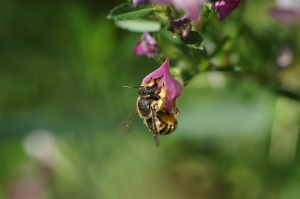 A new species was Andrena dorsata, also visiting Bryonia dioica. This plant has proven to be very useful for all sorts of pollinators; the open flowers means bees can access the nectar and pollen without a lot of difficulty 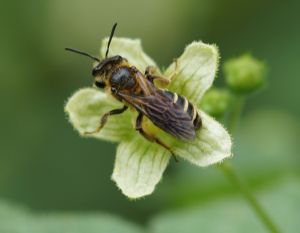 When it comes to birds, the garden has proven to be ok but there were no birds breeding.  The constant presence of neigbhouring cats does not help. I have planted several spiny bushes such as hawthorn, blackthorn, buckthorn, barberry and native roses to offer the birds some protection. These will take time to grow but hopefully provide some place to hide and nest in the near future.

2018 was a fascinating year but also challenging for wildlife in general. I do hope we will not see many droughts like this again but with climate change, this type of drought may become more frequent. Question is how nature will cope with that.

Feeding birds in the garden

Posted on March 18, 2018 by mybiodiversitygarden

Temperatures have dropped considerably and spring is not yet around the corner. We have had a cold spell and some lovely winter birds came to the garden to feed on the fat balls and the peanut cakes with insects are particularly popular. One of my favourite birds are long-tailed tits. Several visited the garden. 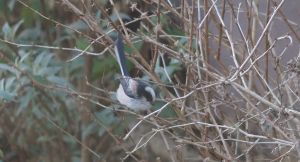 Another beautiful bird was the field fare, Turdus pilaris. This bird is often seen in gardens in winter. This one was feeding on the berries of wild privet, Ligustrum vulgare.

Chaffinches (Fringilla coelebs) and many siskins (Spinus spinus)  were also present. It really feels good feeding birds and helping them through his harsh weather. 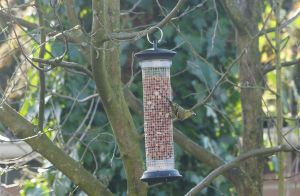 In order to help songbirds thrive in the garden, I have planted mostly native trees and shrubs: blackthorn, wild roses, hawthorns, barberry, holly, hazel, crab apples, cherry and many more; trees/ shrubs that offer food and in some cases also shelter. This is necessary with so many cats around.

Holly, Ilex aquifolium, a valuable tree for the wildlife garden

Posted on October 20, 2017 by mybiodiversitygarden

To many entomologists, trees like oak, birch and willow are top trees as many invertebrates feed on the foliage of the leaves. Other trees such as lime and ash have fewer invertebrates associated with them.

Holly, Ilex aquifolium is a tree of which the leaves are eaten by relatively few insects. However, holly is a valuable tree for the wildlife garden for other reasons. Holly has male and female flowers borne on separate plants which is called dioecious.

It is a tree which sometimes flowers a lot while other trees nearby show hardly any flower. In my garden, the male tree is always full of flowers and the female tree nearby has fewer flowers. The flowers though are rich in nectar and pollen is also collected. Honeybees, bumblebees and several species of solitary bee can be seen foraging on this plant.

Andrena fulva is a species of solitary bee that i saw visiting the flowers on a regular basis.

The tree provides cover for birds and the dead leaves decay slowly and the dry leaf litter can be a shelter for amphibians. The berries are eaten by thrushes such as the redwing, Turdus iliacus. 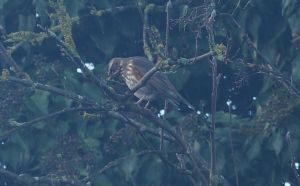 The flower buds are food for the caterpillar of the holly blue butterfly.

Posted on June 11, 2017 by mybiodiversitygarden

In my garden, I have placed several logs given to me by a forester. Some of these logs are old and soft. Introducing dead wood into your garden is good for  wildlife as many invertebrates and amphibians find shelter underneath logs.

A species of solitary bee that nest in rotten wood is the fork-tailed flower bee, Anthophora furcata. It is a long-tongued species with a tongue of about 12mm.

With its long tongue, it can reach nectar which is hidden deep within the flower. Such flowers are for example hedge woundwort, Stachys sylvatica and black horehound, Ballota nigra. 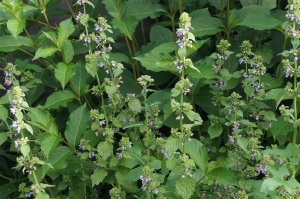 It is a fast flying species so it needs a lot of energy. The flowers mentioned above have high nectar rewards (unlike for example ox-eye daisies). Another plant they like is wood sage, Teucrium scorodonia.

Below a female collecting pollen from wood sage and you can see her pollen basket.

In my garden, all three plants are present and in good numbers. Bees love their plants in bulk so not the odd plant here and there but loads of the same species in one spot. This makes foraging efficient and bees have to be economical when collecting food as flying costs a lot of energy.

Fork-tailed flower bees are a rather scarce species so I am quite happy to see them year after year. It also proves that if you create the right conditions, the bees may come and perhaps even nest in your garden. Learn what the bees need and if you provide that, they may come and stay.

Posted on June 5, 2017 by mybiodiversitygarden

For years I have been growing wild mignonette, Reseda lutea, in my garden. It is sometimes  biennial but in my garden mostly perennial. Its close relative Weld, Reseda luteola, is a biennial plant. In order to keep some in the garden, you have to keep some open space so that they can self seed.

They were once used as a dye, especially weld. The plant contains luteolin and was used to paint wool but one needed a load of this plant so when artificial colours became available, the plant was no longer used that much.

They both produce pollen and nectar. They are very popular with all sorts of insects as the flowers are not deep so the nectar can be reached also by those bees that have shorter tongues.

They prefer sunny and dry conditions.

In my garden, lots of solitary bees visit this plant, especially those that are part of the Hylaeus family. In this case, it is most likely Hylaeus communis or hyalinatus. Often with bees, it is impossible to ID the species without assessing it under a microscope. Hylaeus bees are also referred to as yellow-faced bees and from the picture you can see why. They are small and the males have more yellow / white on their face compared to the females. 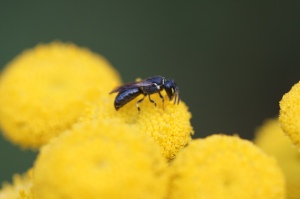 Beekeepers love both Reseda species as they are excellent for honey bees, and have been giving the highest category 5/5 when it comes to value for honeybees.

No pesticides needed in my garden to tackle “pests”

Posted on May 17, 2017 by mybiodiversitygarden

After the cold April month with a predominantly Northern wind, I welcomed the warmer weather in May. We also had some much needed rain. Our weather is quite inconsistent these days with highs and lows. The cold spell has resulted in a high number of aphids.

Plants did not grow well and one may be tempted to spray against aphids but in my garden, I never use any chemicals whatsoever. Now, a few weeks later, most of the aphids are gone since their natural predators such as ladybirds have appeared and consumed the aphids. If you have enough diversity in your garden, there will be natural predators to deal with pests. Please bear in mind that aphids themselves are on the menu for so many species.

Harmonia axyridis is an invasive species from Asia and in my garden the most common ladybird i am afraid.

Another so-called pest in the garden is the spindle ermine, Yponomeuta cagnagella. Their only foodplant is the spindle, or Euonymus europaeus.  The moths are eaten by birds, spiders and bats. The caterpillars can envelop the plant in webbing and it looks unsighty. Ichneumonids or ichneumon wasps and birds feed on the larvae.

Again, no need to use pesticides and let nature do what it knows best. Fascinating to me is how a tiny moth was able to locate its foodplant among the thousands of shrubs in gardens. Amazing, isn’t it for such a small creature. 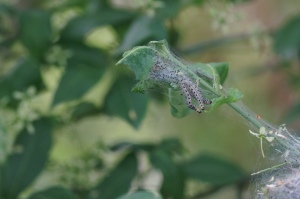 Posted on April 16, 2017 by mybiodiversitygarden

A lot has been said about why we should grow native trees and shrubs. However, a wildlife garden with non-native plants can be wonderful for wildlife; we all love lavender and the butterfly bush is popular with all sorts of butterflies.

As foodplants however, native plants really have some benefits. The common hawthorn, Crataegus monogyna can be a host plant for over 300 organisms. The flowers provide pollen and nectar for pollinators and the fruits, haws, are important for birds in autumn and winter.

Below one of 5 young hawthorns.

Other trees and shrubs which I have planted are the blackthorns (beware of the suckers!) which is also very spiny and offering food to many moth caterpillars as well as a nesting

Wild privet, when allowed to flower, is attractive to many bumblebees, butterflies and leafcutter bees.

The pricky barberry, Berberis vulgaris offer protection from cats and the flowers offer food to solitary bees and bumblebees.

Honeysuckle, Lonicera periclymenum, is a beautiful native climber. The scent of its flowers is overwhelming. The Garden bumblebee loves the flowers and so do hawk moths.

The fly honeysuckle,  Lonicera xylosteum is native to a small part of the Netherlands and also popular with bumblebees.

Field rose, Rosa arvensis offer pollen to all sorts of insects. The leaves are very popular with leafcutter bees that use the leaves for their nests. 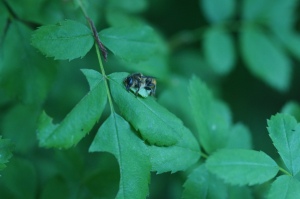 If you have space, a Prunus avium is a great addition to the garden. The flowers are beautiful and offer food to all sorts of bees. 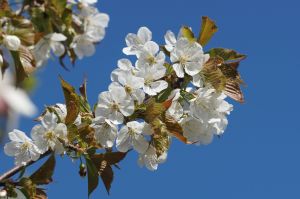 Hazel, Corylus avellana, looking very pretty with its fresh leaves. The leaves of this shrub are popular with all sorts of insects so well worth planting.

All my shrubs and trees are locally sourced: in my case, they come from locations where they have been growing for hundreds of years so very adapted to our climate and are grown without pesticides.